Also known as «El Potrillo» by the media and his fans, Fernández has released 17 studio albums throughout his extraordinary career and has sold more than 35 million albums worldwide. Throughout his career, he has received two Latin GRAMMYs®, the Billboard Hall of Fame Award, as well as a star on the Hollywood Walk of Fame, and the Hispanic Heritage Foundation recently honored his great contribution to music.

Universal Music Group (UMG) is the world leader in music-based entertainment, with a broad array of businesses engaged in recorded music, music publishing, merchandising and audiovisual content in more than 60 countries.  Featuring the most comprehensive catalog of recordings and songs across every musical genre, UMG identifies and develops artists and produces and distributes the most critically acclaimed and commercially successful music in the world.  Committed to artistry, innovation and entrepreneurship, UMG fosters the development of services, platforms and business models in order to broaden artistic and commercial opportunities for our artists and create new experiences for fans. 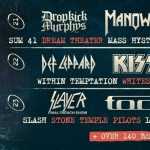